Home   Other   Thelma and Reg Clark

Thelma and Reg Clark: Another Country.

From the moment Thelma Minchin stepped off the train onto the station platform, she must have felt she had entered a foreign country. Urban not rural, industrial not agrarian, loud not genteel, bomb-sites not fields, malodorous with fish rather than scented with flowers and vegetables and harvest. Instead of golden Cotswold stone, there were rows and rows of red brick terraces. It was 1950 and the youngest Minchin daughter had come for a holiday with her sister Eileen in Harrington Street, Cleethorpes.

She’d caught the train and travelled 200 miles north and was supposed to remain for a week. She loved it and asked to stay. Bourton was quiet and boring. Grimsby seemed bustling with opportunity. Eileen’s children, Susan and John, were excited to have their auntie living with them. In the morning they’d climb into bed with her. She’d always greet them with a big smile, a cuddle and a few words uttered in a funny West Country accent.

As the more academic of the four sisters – she had won a scholarship to Northleach school – Thelma made regular visits to borrow books from a small private library on Grimsby Road, taking John along. She got a job in a chemists shop, then as a secretary, becoming employed by a local fish merchant, William Clark. He had a son Reg working in the business with him. 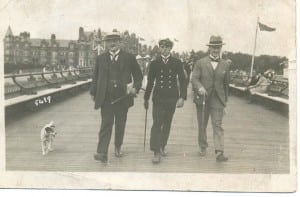 The young Reg looks proud to wear his Merchant Navy uniform, carrying a baton and smoking a cigarette from the corner of his mouth, exactly like his father William on the left. The two older men seem impressed by the younger one, letting him march in the middle. On the right, with a brolly, is his Uncle Alf. As William is wearing a straw boater, they were probably on holiday, taking a daily constitutional on a wooden pier at the seaside. Scarborough? There are flags flying, women in white hats and a large hotel stands in the background. A dog trots alongside and watches them curiously. CLICK TO ENLARGE

Reg was a larger than life character. He’d been raised in Boston, Lincolnshire, and at 15 had joined the Merchant Navy straight from school. By the 1920s he had been round the world visiting many ports including Walleroo, South Australia. After leaving the shipping service, he joined his father in business and took the firm over when his father died in the early 1950s. Although their roots were in Boston, they had relocated because the port kept silting up and by then Grimsby was flourishing as the  world capital of deep sea trawling. 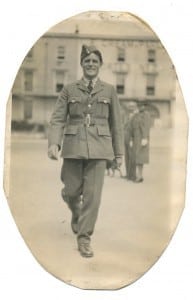 He and Thelma married. They went on to have three children – Christopher, Judith and Sarah. 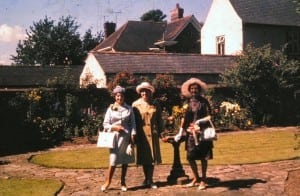 1963. Thelma poses between her sisters Nancy and Peggy at the wedding of Susan and John Waite 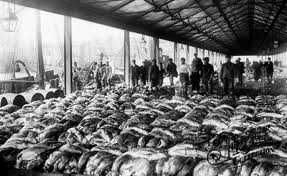 Reg was a familiar sight as he motored between his home in Cleethorpes and Grimsby Fish Docks at the wheel of his Alvis Silver Eagle. It was a prestigious car, traditional and distinctive, although he had to wear a trilby and raincoat on rainy days because of its leaky sunroof. 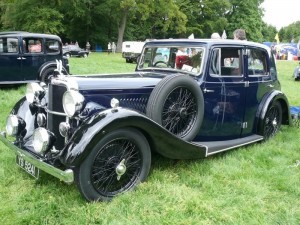 An Alvis Silver Eagle. Distinctive as Reg drove it to Grimsby Fish Docks and sometimes down to Bourton, wearing a hat and raincoat in case of rain leaking in through the sunroof

With Thelma, he started driving to Bourton regularly, sometimes taking Eileen, Ken, Susan and John, as well as their dog Judy who would stick her head out of the window and bark and try to jump out at cats as they reached speeds of upto 60mph. Again, when it rained, the passengers would don hats and coats. 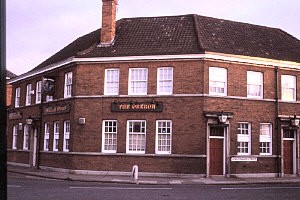 The Oberon where Reg liked to spike his beer with a glass of Green Chartreuse, alarming other customers

He liked to socialise at the Oberon public house near the docks, the Constitutional Club, Cleethorpes, and in later years, at the Crest Hotel in Grimsby Market Place. He was known for his bonhomie and tall stories and suggesting trade unionists should be “put against a wall and mown down” and delighted in shocking bar staff by topping up his pint with a measure of Green Chartreuse, giving the beer a radioactive glow which alarmed newly-arriving customers. He also liked Chartreuse on ice-cream.

“TRAIN! TRAIN!” That summoning cry would often ring out in the streets of Grimsby and Cleethorpes and a train would pull over to the kerb in Riby Square. Tired of riding in his Alvis Silver Eagle, Reg would climb aboard and take a seat, instructing the driver as to his destination. Here he occupies his own luxurious private carriage, getting a premium position with access to both window and aisle. It is 1970 approximately and he is aboard the light railway which used to be at the end of Cleethorpes Promenade, with niece Sally Riding, her brother Simon and other suspicious characters, notably a cowgirl visiting from Wyoming. The train driver keeps a cool head beneath his engineer’s cap, concentrating on attaining getaway speed, afraid this might be a hold-up of the kind he once saw at the Grimsby Odeon in ‘Annie Get Your Gun’. The Dock Tower soars in the background, marking Reg’s place of business. Photo Vic Riding

He also got to know favourite landlords in and around Bourton, supplying them with fresh fish for their restaurants which he would deliver personally. 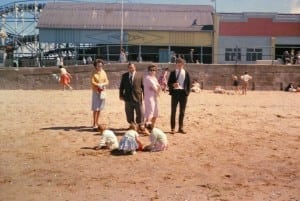 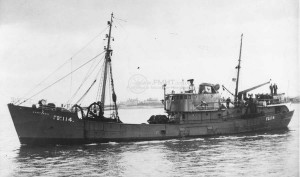 The Boston Hawfinch, typical of the Boston company’s fleet in Grimsby. In 1963 Reg arranged for his nephew John Dale to take a 2-week working trip on board it to the Faroe Islands, half way to Iceland. 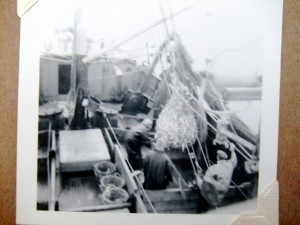 John Dale photographs the trawl net being hauled in somewhere off the Faroe Islands. He showed it to Reg who was impressed.