Home   Other   1949: The Wedding of Peggy Minchin to Vic Riding. Missing Photos Found!

Even four years after the war, British life was still dominated by the ration book. So when the Minchins brought a touch of glamour to Bourton one summer’s day in 1949, it was an event well worth documenting. As Peggy Minchin and Vic Riding married, one of their friends made a careful photographic record, from their arrival at St Lawrence’s church to the reception at the Studio Cafe behind the Victoria Hall. Then Vic took the camera with him and captured scenes from their honeymoon, in a sunny Torquay.

Afterwards Peggy fitted the photos into an album, cutting them with scissors in order to make them fit. She sacrificed some of the background to get all the people in.

Over the years she and Vic would show them to their children, pleased that for one day they had been able to defy the austerity which had still been pervading the country. She looked beautiful in a gown of white lace, as did her three bridesmaids, and most of Bourton seemed to have turned out watch, the even offering a moment of escapism. The sun shone, the sky was blue. In 1949, it wasn’t just food and drink which remained in short supply. It was cloth and clothing. The fact that everyone looked so smart and stylish was a tribute to the females of the family, to their careful shopping and skilful use of the sewing machine. This was a wedding which needed its place in the Minchin archives.

Then they tucked the pictures away.

First Vic died, then Peggy, and later their offspring wondered where those precious photos had gone. Where had Peggy put them? They had vanished.

‘I didn’t think we had any photos of the wedding,’ said their son Simon. ‘We’d moved a lot when we were children and I believed they must have got lost. Then I woke up and had a eureka moment!

‘I went up to the loft room and found an album of old pictures which Mum had put together. As I turned the pages, I realised this was what I was looking for.’

His find meant a great deal to Simon and his sisters, Julie and Sally. But their significance reached wider. It was the first Minchin wedding for eight years. Eileen had married in 1941, in the middle of war, with Ken about to be sent to fight as part of the Eighth Army in North Africa. The country was focused on defeating Germany and that dictated the simplicity of the occasion. There was no room for indulgence. But now it was 8 August 1949 and the nation was at peace and there was the opportunity for a more relaxed family get-together. So, despite the rationing, this wedding benefitted from an air of optimism and hope as well as a broader guest list – including the vanguard of the next generation, Eileen’s children, Susan, six, and John, three. 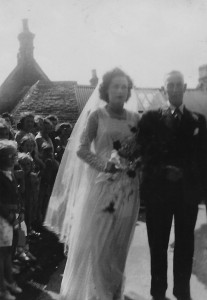 There is a good turnout of Bourton people enjoying the sunshine to see the bride Peggy Minchin arrive at St Lawrence’s on the arm of her proud father, Bill. Her veil is held by orange blossom and she is carrying a bouquet of red carnations. As they enter the church, organist Mr F. A Clements strikes up. 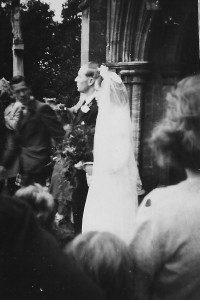 The service has taken place and now the happy couple emerge from the church as husband and wife. It was held in front of a full congregation and was conducted by the Rev. J. K. Nettlefold, Rector of Bourton, and followed by a hymn which Peggy and Vic had selected – ‘Lead us, Heavenly Father, lead us’. 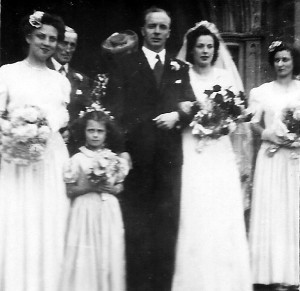 Bride and groom pause on the church steps, with the three bridesmaids – Peggy’s sisters Thelma and Nancy, and her niece Susan (Dale), aged six. 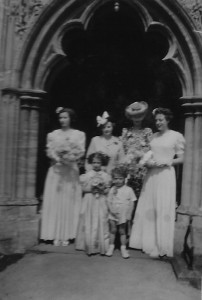 Peggy’s mother May Minchin poses with her three other daughters – Nancy, Eileen and Thelma. In front of them is Susan who has now been joined by her brother John, aged three, whose body language reveals how his enjoyment is being blighted by the lack of toilet facilities (See later picture for full dramatic revelations.) Thelma looks sympathetic while Nancy averts her eyes. The elder bridesmaids wear dresses of blue moss crepe, with flowers in their hair, and carry bouquets of pink carnations. Susan wears a dress of pink taffeta and carries a small posy of pink and white flowers. 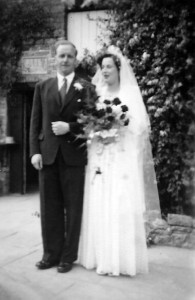 Vic and Peggy arrive at the Studio Cafe. Before moving to Rissington Road, the Minchins used to live next door. It was here that Eileen and Ken also held their reception after their wedding in 1941. 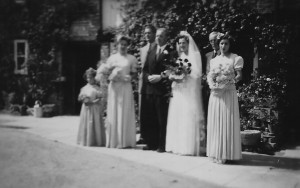 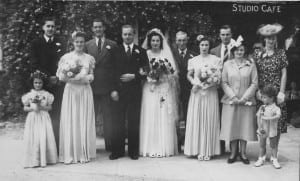 The two men on the left have not been identified. The others are (l-r) Susan, Thelma, Vic, Peggy, Bill, Nancy, Ken Dale, May, Eileen, John. 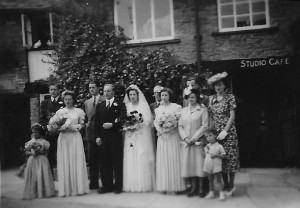 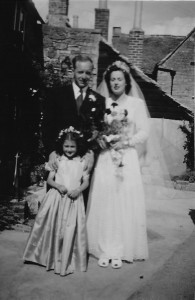 Susan poses with the happy couple. 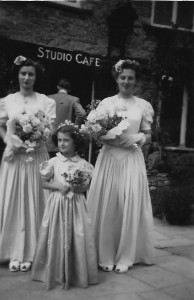 Nancy, Susan, Thelma.Susan appears to be on the lookout for her darling but troubled brother. 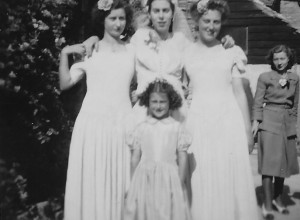 The three bridesmaids are joined by one of Peggy’s friends. Like the bride, she too is wearing a veil. Susan Dale is in the picture yet again. 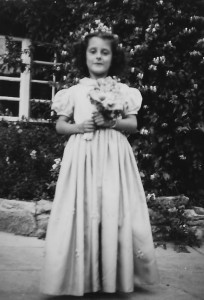 Yes, it’s Susan Dale, aged six, again, in a pink taffeta dress, clutching her posy of pink and white flowers. What has happened to her dear little brother? 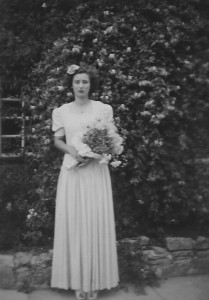 Nancy in a dress of blue moss crepe, with flowers in her hair. 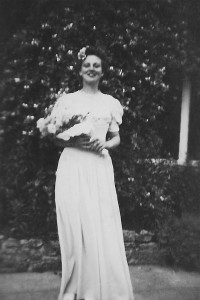 Like Nancy, Thelma is in blue moss crepe and holding a bouquet of pink carnations. 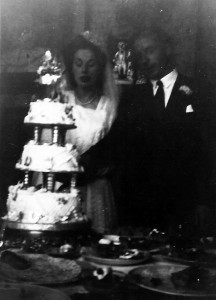 Inside the Studio Cafe, the reception is well under way. Vic rests his hand on Peggy’s as they cut the first slice of a three-tier wedding cake. Plates hold the remains of the meal. 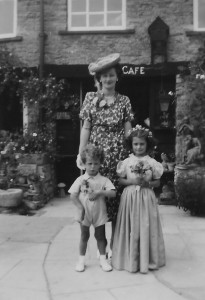 Eileen with her children, John and Susan. John’s troubled expression and body language suggests he is still highly critical of the toilet facilities. 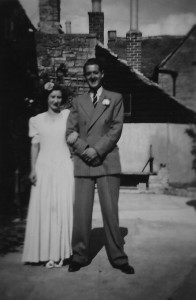 Nancy with Derek Pitway, son of Bourton’s police sergeant. Has she been arrested? 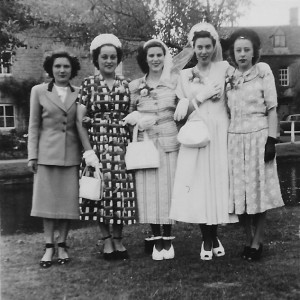 Some of Peggy’s friends were amongst the guests. 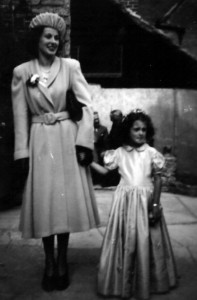 The bride has changed out of her wedding gown in preparation for her departure on honeymoon. She looks the height of fashion in a pink dress and dove grey coat with a pink hat and brown accessories. Also getting in the picture again, clasping her hand, is Susan Dale. Earlier in the day: Susan Dale acts as if she can drive while her brother John looks away knowing she definitely cannot, pleading with his eyes for someone to please please stop her before she causes mayhem on Bourton High Street. This is John at his most content before a series of ‘waterworks’ mishaps and emergencies which involve attempting to relieve himself in a ditch, falling into the ditch, sobbing and wailing, then being unjustly criticised which only made him cry more. For several years to come, he will be left feeling deeply misunderstood and ‘picked on’. 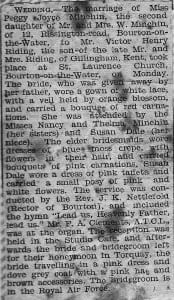 A report of the wedding. 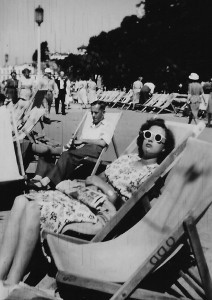 Peggy catches some rays. The happy couple travelled from Bourton to the resort of Torquay and continued to be blessed with fine weather. 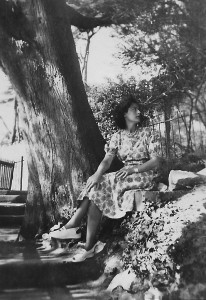 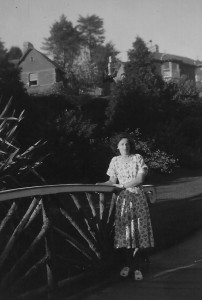 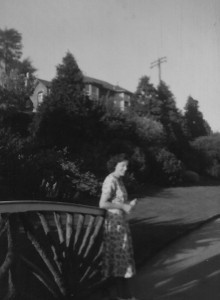 Even on holiday in the August sunshine, Vic prefers to look smart in a lounge suit and tie.