Kidnap: The Morning After the Night Before.

Excitement reached fever pitch on Sunday morning. Adhering to tradition, some family members held the annual Bourton Duck Race. It was one way to recover from the excesses of the 2013 reunion and dinner at The Mousetrap and restore a sense of calm amongst those who had overdone it (no names, usual suspects). Here you can watch people and animals go wild and one young man who seems determined to jump into the Windrush at any excuse.

WARNING: THIS ITEM CONTAINS GRAPHIC IMAGES. LOOK AWAY NOW IF YOU ARE OF A NERVOUS DISPOSITION.

And they’re off..! The ducks begin their epic journey into the white water hell of the River Windrush. Which will survive, which will perish? It is a journey not just into the heart of Bourton on the Water but into the soul of every man, woman and creature. Ben, Alex, Jacob, and Sue are supervised and led by Marlon Brando. The ducks are (l to r) Avril, Sidney, Clint, Paddles, Ziggy and Derek. 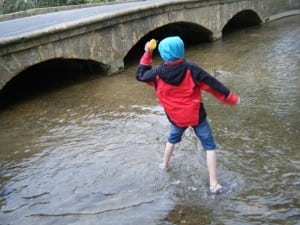 The front line of courage. Jacob gives his duck, Sidney, a friendly helping hand. He says his duck doesn’t mind really but others consider alerting the authorities. NOTE: Some ducks were harmed in the making of this documentary. 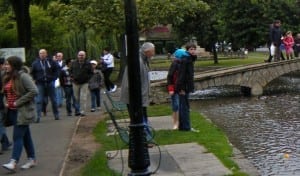 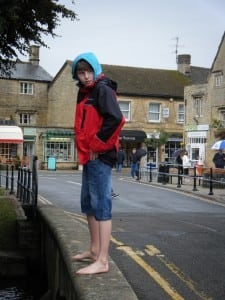 The Shoeless Boy of Bourton. It’s a scandal that children must live like this in 2013. 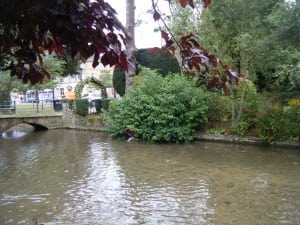 Apocaduck Now!. The Horror, the Horror … Sidney is in trouble and Jacob dives into the bushes to rescue him. Can Sidney survive this nightmare on the Windrush? 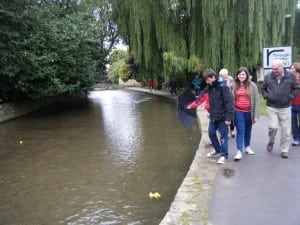 The crowd goes wild as the pace hots up and Avril and Derek speed into the final lap, still watched by Marlon Brando. It’s neck and neck between Derek and Avril. The ducks hurtle towards the finishing line and everyone realises that Derek is the shock leader and his owner is – Sue. 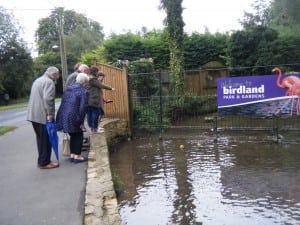 Everyone is shouting and hollering, urging Avril and Derek into a do-or-die finish. The rest – Sidney, Clint, Paddles and Ziggy – have discovered why the Windrush can turn into Hell. 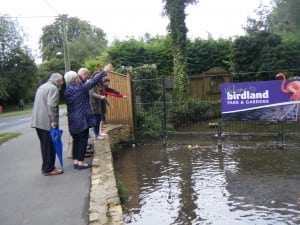 It’s Sue! The glory, the glory…She raises her arm in triumph as Derek wins by a beak. 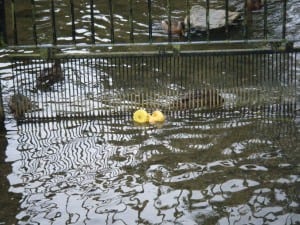 Q: “Is that duck wild?”  A: “Wild? He’s flippin’ furious!”  Derek (right) rolls over exhausted and catches his breath, thinking, ‘Qwikey, I have to do it all again next year.’ But he has no choice. It’s either that or becoming a Peking speciality in Bourton’s Chinese takeaway. Avril lies flat out, sobbing in disappointment. 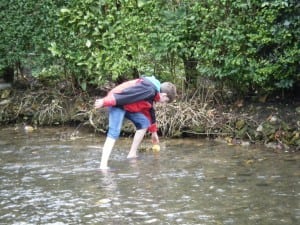 Jacob jumps in the water, as per usual, and rescues Sidney who was useless and came in last. But, ever the young gentleman, he congratulates his grandmother on her well-deserved success. NEWS UPDATE: Paddles was lost without trace during the making of this documentary. Avril and Ziggy were last heard of being held prisoner. No ransom has yet been paid. 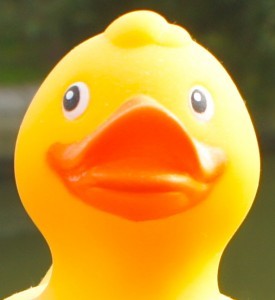 LATE BREAKING NEWS: This photo has now been received of Avril with the following ransom note. She is smiling bravely but the fear is visible in her eyes. 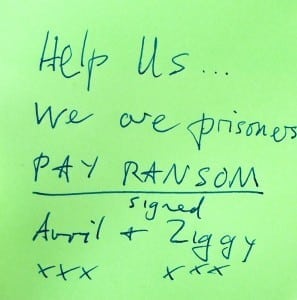 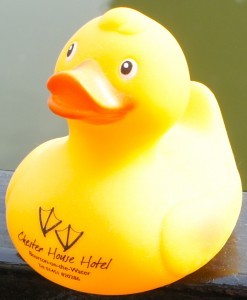 This photo followed, showing Ziggy. He looks worryingly well-fed, raising suspicion that he is being fattened for culinary purposes, to satisfy Bourton’s appetite for Peking Duck and Duck Rolls. Police have been informed and are preparing to mount a rescue mission, led by Derek, winner of Apocaduck Now! 2013. 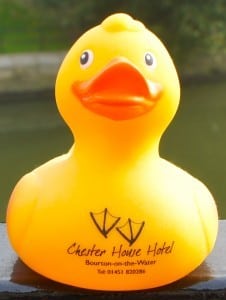 Although shy by nature, brave Derek has stepped into the media spotlight as he prepares to lead a rescue mission to free Avril and Ziggy. Here he is under training by the SAS Regiment. KEEP TUNED FOR LATEST DEVELOPMENTS IN THIS INCREDIBLE STORY. And what DID happen to Paddles? We will reveal . . .