A Surprise, a Tapestry and a Very Good Time 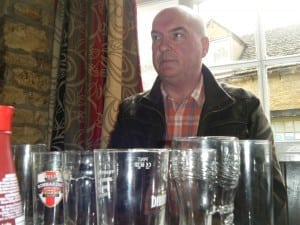 Steve ‘warms up’ for the evening ahead. It is 14 September 2013. Overcome with excitement, he relaxes with the odd pint at the Duke of Wellington. 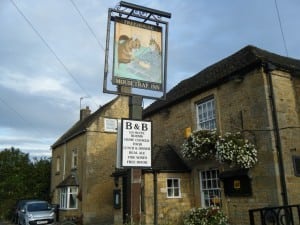 The evening of Saturday 14 September arrived, mild and sunny. Amongst the earliest to step through the doors of The Mousetrap Inn were Alasdair and Kerry Page who were carrying a strange roll of paper. What on earth had they brought? They began to unwrap it to reveal its contents. At first glance, it looked like they had nicked the Bayeux Tapestry! Then they started to stick it on the stone wall and all was revealed – a huge family tree, with photographic portraits of everyone involved. It triggered a universal response: Wow! 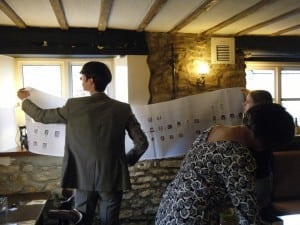 Wow! The Minchin Tapestry goes on public display. Alasdair and Kerry spring a surprise with the family tree they had prepared earlier. Lorna Clark masterminds the seating plan. She leans over her maps, organising it like a military operation. 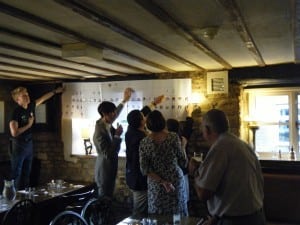 People gather at the family tree. 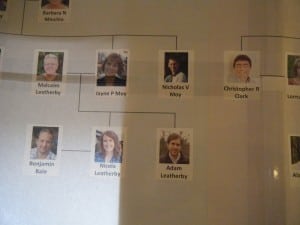 Part of the chart. Every name carried a portrait. Some said it was not their best photo.

Arrangements for the family reunion had not gone without the odd hitch. As it had drawn near, there was a last-minute panic taking place behind the scenes. Only the cool heads of organising masterminds Lorna and Chris Clark prevented events from careering out of control. For business reasons, Chester House had announced they would not be able to host the dinner, as they had done for a number of years. But Lorna contacted the Mousetrap and they immediately offered a welcome of the most warm nature. New arrangements were swiftly made. But how would it go? 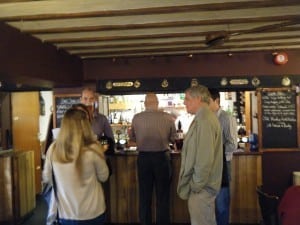 Aperitifs. Who is that familiar figure ordering at the bar between Ben Bale and Paul Moy? 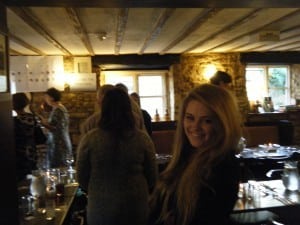 Guests of all generations. Here is Catherine… 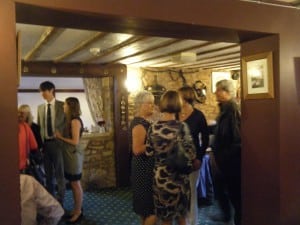 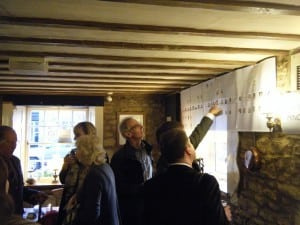 John Moy, Karen, Julie, Simon, Nicky and Mickey are drawn back to the Minchin Tapestry. What secrets does it hold? Simon stares hard. Will it answer the question which has dogged the whole of his life? 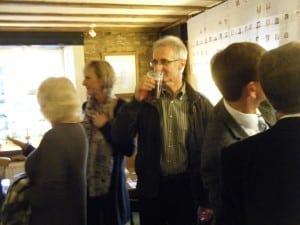 “Crikey, so that’s who Julie and Sally are,” thinks a flabbergasted Simon, peering furtively at them over his pint of beer. “It explains so much about the past.” 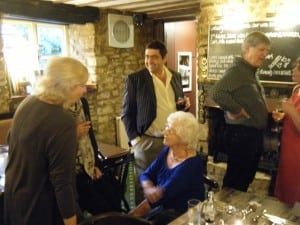 Nancy looks astonished as Julie tells her: ‘It’s all beginning to click into place now. I always wondered why we kept meeting him. It says he’s my brother.’

The guests of honour arrived: Nancy and John Moy, the most senior of the attendees. Nancy was extremely smart in a blue dress and John looked very well. In fact Nancy was the only person present to have been born with the Minchin surname. Her two surviving sisters, Eileen and Thelma, were not able to make the trip from Cleethorpes to Bourton but were kept up-to-date by telephone as to the events. After much enthusiastic kissing and greeting, people took their seats at the tables.

A Tribute to Andrew

To begin with, Sophie Moy rose to her feet to speak briefly about the much-missed presence of her father Andrew, an organiser of previous reunions and one of the event’s strongest supporters. With her mother Helen alongside Nancy and John, she described him as ‘the life and soul of the party’. Everyone raised their glasses in agreement and in a toast to his memory.

Two Engagements and a Marriage

There was also extremely good news, particularly from that branch of the family – two engagements and one marriage. The engagements were of Hayley and Nicola, and the marriage was that of Nicky. Only the weekend before Nicky had married Mickey, his partner of 26 years, in a ceremony in Dusseldorf, Germany, where he now lives. Everyone was delighted to see that he and Mickey had flown over especially for the reunion. 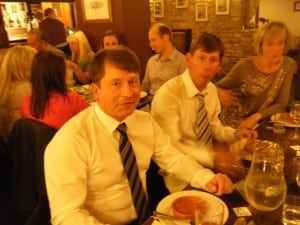 Mickey and Nicky had flown over from Germany after their important weekend.

The meal was served. It was generally agreed it was of an excellent standard with people particularly commending the lamb and the fish. Wine and beer flowed freely as did chatter, banter and badinage.

John Dale rose to his feet to thank Alasdair and Kerry for preparing the family tree chart and declared that he had a very worrying matter to communicate. To his consternation, further research had established a family connection to Liverpool ‘of all places’ – in the 1870s, May Minchin’s maternal grandfather, Thomas Goode, had been landlord of the Kings Arms public house in Ormskirk (as detailed elsewhere on this site). Trying not to look at certain individuals draining their glasses in front of him, he said this explained a lot and he was not learning Scouse at this later stage of life and proposed they all keep it top secret to protect the family’s reputation for having a bath at least once a fortnight whether needed or not. All agreed except Steve Reilly who sat there with a smug smile, as did his two offspring, Lizzie and Ben, who said they took great pride in their Liverpudlian links, especially as Everton had just beaten Chelsea 1-0 earlier that evening. 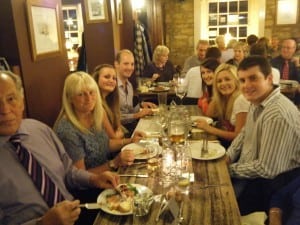 Hey, the pub has a dishwasher! Yet most of these satisfied customers have cleaned and polished their own plates just in case. 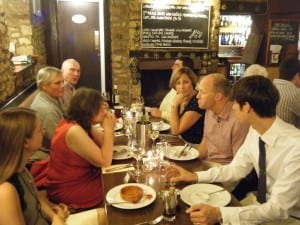 Sophisticated discourse. Here Alex sticks out his bottom lip and ponders the loss of Bambi’s mum and everyone stares at him trying to make him cry

Julie stood and spoke forcefully and eloquently in order to encourage the guests to read the newly-launched family website and, if they wished, contribute with their own stories and pictures. With missionary zeal, she said she read it ‘every day’ and it had frequently reduced her ‘to tears’.

As more drink was taken, Lorna and Chris conducted a peculiar kind of raffle, the rules of which resembled the radio 4 game, Mornington Crescent, in their esotericism. Prizes were rich and varied including a bottle of something for Susan Waite and a box of something else for Robert Tate. As well as bewildered, they looked extremely thrilled. 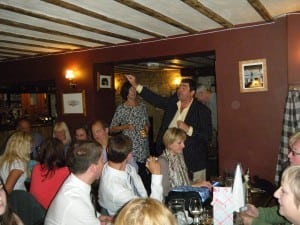 Chris draws the tickets for the prize competition ably assisted by his own ‘Debbie McGee’.

Thanks to Lorna and Chris

Noticing a lull, John Dale seized another excuse to speak, this time thanking Lorna and Chris for their ‘great work’. Chris said it ‘was all down to Lorna really’ and everyone agreed that this was highly likely. John Dale then withdrew most of the thanks to Chris, redirecting them towards Lorna. He also expressed deep gratitude to the landlord, chef and staff of The Mousetrap for their excellent service and food, shouting these latter points at the top of his voice in the hope they would definitely hear and stand him a free meal and bottle of wine at some future date. 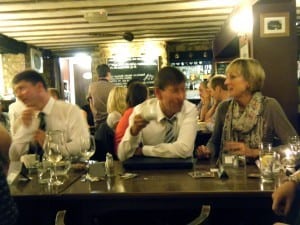 The Rejection of Gus

A small party then ventured out to walk Mel and Sally’s lovely dog, Gus, and to allow him to satisfy his natural instincts, sniffing lampposts and doing his toilet. Every year Gus arrives with high hopes that he will be allowed to attend the party and every year he is deeply disappointed. This year was no different and he expressed his feelings of rejection with little whimpers of frustration as he arrived at the door of The Mousetrap but was not allowed to enter. He could not understand why he was discriminated against and projected the sadness through slow blinks of his big brown eyes. It was a very upsetting scene, reminiscent of the loss of Bambi’s mum which he once saw on TV. 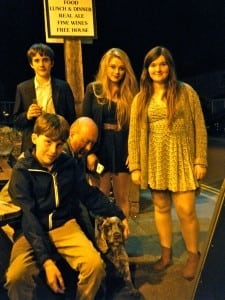 Gus, feeling hurt and rejected because he can’t join in the fun, re-enacts the loss of Bambi’s mum and holds a sit-down protest outside The Mousetrap with a determined bunch of fierce, militant supporters: Ben, Catherine, Lizzie, Jacob and Mel. 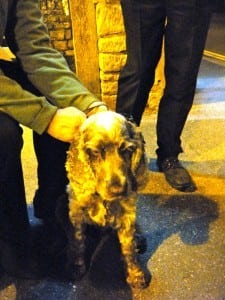 Gus contemplates the big questions in life, asking: ‘Why Bambi’s mum?’ He has no answer. No wonder he wakes up whimpering in the dark, lonely hours of the early morning.

As well as Eileen and Thelma, other much missed absentees included Malcolm and Adam Leatherby, and Tom Knowles, the latter being unwilling to pop over for the evening from Japan where he is teaching English.

This will run and run…

The evening wended its way towards a natural end with everyone declaring their enthusiasm to return in 2014 to The Mousetrap and (to quote the West End theatre posters for the play of that name) ‘This one could run and run and run…’ Farewells were exchanged, supplemented with more hugs and kisses, and the guests departed and returned home safely.

Fun was had by all and it was widely acclaimed a great success. Here are some photographs taken by Nicky Moy. 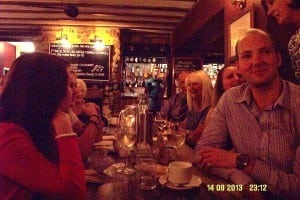 One of the more glamorous tables 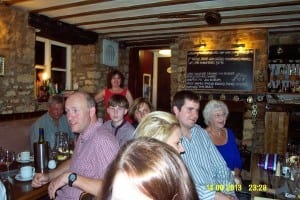 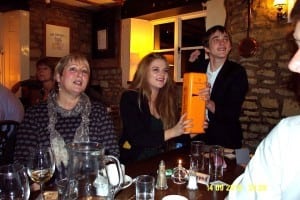 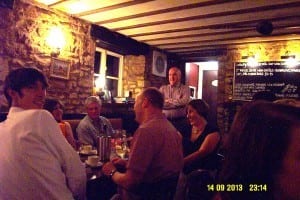 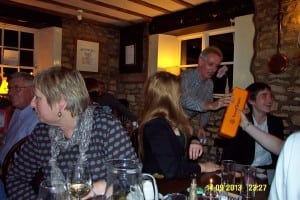 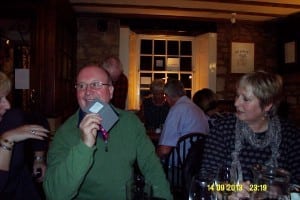