From his earliest days, John Waite showed he was gifted in sport. Football, cricket, athletics. It didn’t matter which kind, he seemed to come out winner with no need to try too hard. Well, that was the impression he gave, that it was all so natural. He could run, he could bat, he could bowl and he could definitely kick a football both hard and accurately. And he wrapped his achievements in another virtue which was equally natural and characteristic: modesty.

1942: Betty Waite with her son, John Aidan, who is already looking alarmingly sturdy.

He went on to play football for England Schoolboys and England Youth teams, flying to a tournament in Austria. He was on the right wing when Terry Venables – later England captain and manager – was at inside-right. Other members were John Sissons, of West Ham, Dave Wagstaffe, of Wolves and Martin Peters, who went on to score in England’s 1966 World Cup victory.

John was still a sixth-former at school when he made his proud debut in the black and white shirt off his home club, Grimsby Town – then a Second Division team – and caused a sensation. In the early minutes against Barnsley, he cut in from the right and, while defenders hesitated at the sight of this fleet-footed youngster, he belted the ball from the edge of the penalty box straight into the top corner of the net. It was a brilliant goal, worthy of Bobby Charlton. The crowd – including his girlfriend Susan, father Reg and future brother-in-law John – went wild. A star was born. From then on, he was a local hero and celebrity.

Here are some photographs and newspaper cuttings which chart his remarkable successes. Please send in more stories, anecdotes and photos. 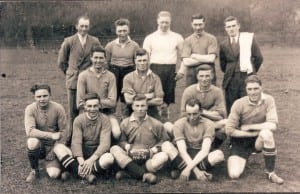 John’s Granny and Grandad Steel said he took after “Our Jack” – his Uncle Jack, a strong and talented football player shown here in the middle of the 1934-35 team in Wellingore, the Lincolnshire village where John was born eight years later. John’s Uncle Walter is centre front row. 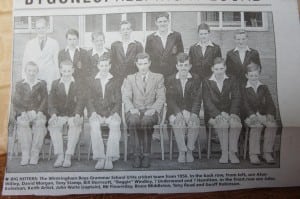 1956: John Waite as captain of Wintringham Grammar School’s under-14s cricket team. Sitting on the other side of the teacher is his fellow all-rounder Bruce Middleton. They were to remain good friends into their seventies. At the back, in umpire’s white jacket, is Alan Willey who also lived in Clifton Road. CLICK TO ENLARGE. 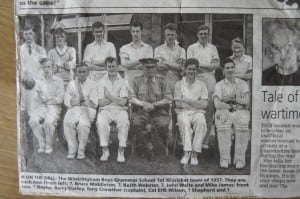 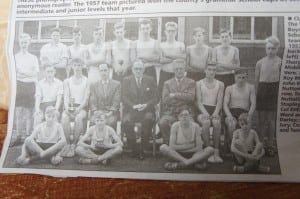 1957: Cup Heroes. The school athletics team have just won Lincolnshire Grammar School cups. John is back row, second from right. Again Bruce is there, back row, third from left. They used to compete fiercely on the track at middle distance running, a la Seb Coe and Steve Ovett, but friendly. Only three years earlier, Roger Bannister had run the world’s first 4 minute mile and that inspired a decade of schoolboys like John and Bruce. 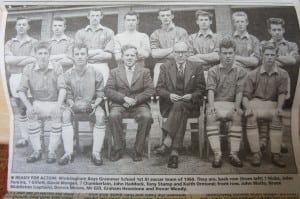 The school 1st XI football team – later described as the ‘dream team’. John is front left next to Bruce, who is captain. John used to fly down the right wing and cross it to Bruce to rise in the air and nod it into the net. Bruce remembers it as an ‘intuitive partnership’. Back, right is Keith Ormond, also from Clifton Road. This was an outstanding team but not without tragedy. One member took his own life while in the sixth-form. And John Haddock, back row third from right, became a pilot in the RAF’s Red Arrows display team only to die when his plane clipped another and crashed. He was 22. The scary man at the front is headmaster Ronald Gill, himself a former Olympic athlete, who ran a brilliant school with a stare that put the fear of God into the boys. He is practising it here, making all the lads look nervous rather than proud. He once told the boys in morning assembly: ‘I have witnessed incidents of promiscuous osculation taking place involving some of you and members of the girls’ school. Desist at once.’ He meant stop snogging. It was his kind of joke. He was always lecturing the boys on morals and ethics. When he retired, he left his wife and ran off with another woman to Scarborough. 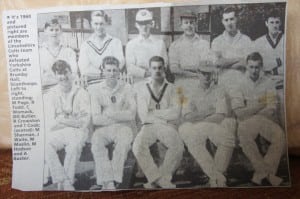 1960: The consummate all-rounder, John is playing for the Lincolnshire Colts as well as hurtling down the wing for the school football team while also emulating Roger Bannister on the athletics track. No wonder his mum Betty used to serve him TWO egg and bacon breakfasts every morning before school. The hungry lad needed it. He is front row, second from left. But isn’t someone missing? Where the heck is his buddy Brucie? For once, the deadly duo have been split up. John must play without him. 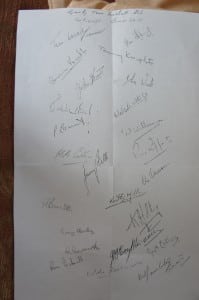 At 17, while School Captain at Wintringham Grammar, John was selected for the first team squad at Grimsby Town, then a good Second Division club. This was a remarkable achievement. His signature is third line down on a page headed Grimsby Town Football Club, Autographs Season 60-61. Other names include the club’s stars – Ron Rafferty, Don Donovan, Jimmy Fell, Brian Clifton and Duncan Welbourne, as well as manager Tim Ward. Susan Dale never missed a home game when her boyfriend was playing. She’d cheer every time he touched the ball and boo terribly if he lost it, generally joining in the cries of ‘Come on Town’ and ‘Up the Mariners!’  Coincidentally, her father Ken was then working as general joiner/handyman at the Town’s ground, Blundell Park. 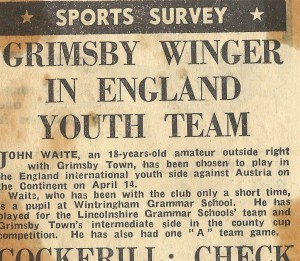 The next stage, John was selected for the England international youth side. He boarded a plane for Austria in the company of other young players including team captain Terry Venables and Martin Peters, later 1966 World Cup hero. 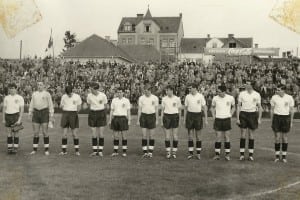 Austria 1960. John is fourth from left, looking down the line towards the skipper, Terry Venables. Martin Peters is extreme right. 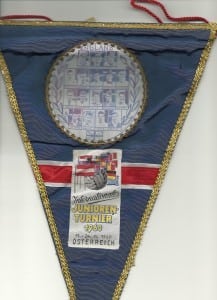 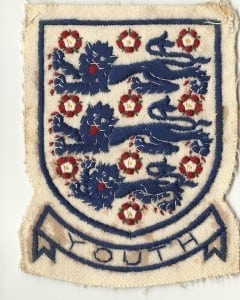 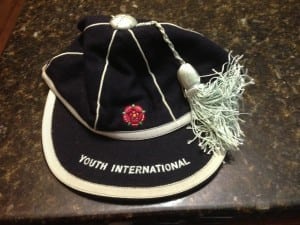 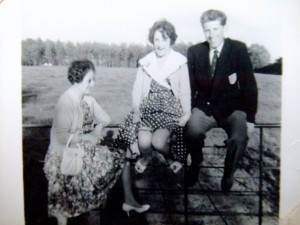 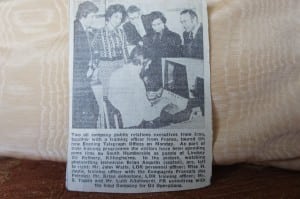 1970s: While still playing semi-professional football, John worked as personnel officer for Lindsey Oil Refinery on the Humber Bank. Here he is (left) with two oil company public relations executives from Iraq, together with a training officer from France, touring the offices of the Grimsby Evening Telegraph. They are fascinated by the latest in computer technology.

In the 1980s John became a commercial manager for Grimsby Town and devoted himself to being one of the Blundell Park backroom boys. In this role, he penned a weekly column for the local newspaper, revealing the secrets from behind the scenes. Sometimes his dulcet tones would be heard over the air as he did live running reports of matches on local radio. But this didn’t always go smoothly.

In one humorous column he says: ‘Writing these notes while watching Mastermind on Sunday evening, I am in great sympathy with some of the contestants. I had the sort of disaster last Saturday afternoon they sometimes suffer on the Sunday. How often is a contestant going well, then makes a mistake and thereafter the harder they try the worse their situation becomes?’

He continues: ‘During my final summary, I lost my place in my notes and the harder I tried to get back onto cue, the bigger mess I made of it, so much so that when I eventually returned home on Saturday evening my wife Sue genuinely thought I was having a heart attack on air. Nothing so severe. I simply froze!’ 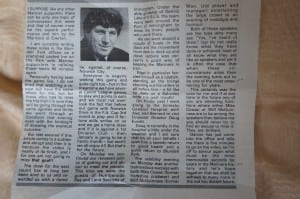 1980s: John’s handsome features peer from the top of his weekly newspaper column. This one begins: ‘I suppose like any other Mariner supporter, there can be only one topic of conversation this week and that of course must be the superb performance and win at Everton. I am writing these notes in the Blundell Park offices as Mariner supporters, in a crammed packed Inn on the Park, relive those hectic 90 minutes….’ 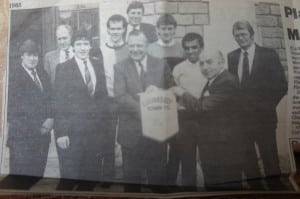 John watches over a presentation at Grimsby Town. 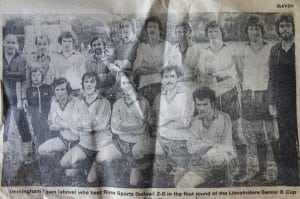 After his playing days John was manager, then chairman of Immingham Town. Here his son Mark (second from left) is the official team mascot and they have just won 2-0 against Ross Sports. He says: ‘I think that was when I first learned to swear really well.’ John is not in the picture. 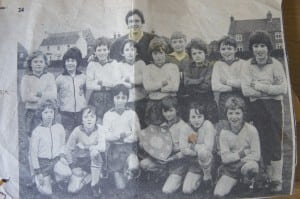 Like father like son. Mark followed in John’s footsteps, becoming an outstanding footballer, one of several in the family. Here he is (front, second left) with his team at Keelby, where John and Susan lived. The boys proudly display the shield they have won. 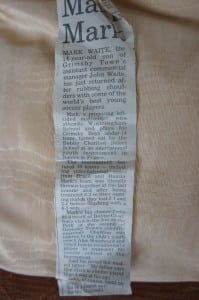 Grimsby Evening Telegraph: ‘Mark Waite, the 14-year-old son of Grimsby Town’s assistant commercial manager John Waite has just returned after rubbing shoulders with some of the world’s best young soccer players. Mark, a promising left-sided midfielder, who attends Wintringham School and plays for Grimsby Boys under-14 team, turned out for the Bobby Charlton Select School at an international tournament in Nantes in France. The tournament featured 16 teams – including international sides from Brazil and Russia. Mark’s team was literally thrown together at the last minute and after being trounced 6-2 in their opening match they lost 2-1 and 3-1 before finishing with a 6-1 win.  Said his proud but modest father: ‘My father says that Mark is a better player than I was at his age.’ 19 December, 2013. John was a special guest at Blundell Park. Here he is third from the left, standing in the centre circle to acknowledge the cheers from the crowd. It was part of the ‘Mariners Memory’ event, with the game against Kidderminster being used by fans to don their favourite shirt from days gone by and recall their most memorable Mariners’ events. John is talking to Terry Donovan, son of Town legend ‘Don’ Donovan who played at right back behind schoolboy John flying down the right wing.

On the Replay Sporting Memories website in December 2013, Mark recalled his own involvement with Grimsby Town: “Our family has been involved with GTFC for over 50 years and my first memory was looking through my dad’s fantastic football scrapbook that my grandad had put together.

“Hearing my dad re-tell stories of Mariners games involving himself, Ron Rafferty and Johnny Scott made a young boy dream himself of one day pulling on the black and white stripes. The scrapbook featured headlines proclaiming “it was all worth Waite-ing for” and pictures of my dad lined up alongside Terry Venables and Martin Peters as an England U21 representative, one of a select number of Grimsby Town players who have also represented their country.

“These early memories were followed by access to the inner workings of the club as my dad became assistant Commercial Manager working alongside Alec King. Meeting Graham Taylor, then manager of visiting Watford, who had played with my dad was a highlight that still seems like it happened yesterday. This was a great era for GTFC and watching the likes of Kevin Drinkell, Joe Waters and Bobby Cummings take on modern day powerhouses Chelsea and Newcastle were great footballing lessons for a hopeful professional, teenage footballer.

“This was followed by my brief playing stint with the club. Never being fortunate (or good) enough to play for the first team I still cherish the memories of Grimsby Colts, Grimsby Juniors and the Reserves and my time as a YTS apprentice. Travelling with the Reserves to Roker Park and the abuse received from the Sunderland fans was particularly eye opening for a 17 year old. Overall, GTFC has been a huge part of the Waite family and we are thankful for the memories.” 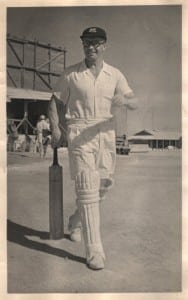 John was not the only sporting hero in the family. Here Vic Riding, freshly laundered and pressed, strides out confidently in order to hammer some poor bowler over the rooftops. It is an impressive and stylish image even if close forensic examination reveals he is not wearing trousers but white shorts.

For more on John Waite, go to our article My Footballing Cousin at https://www.minchinsofbourton.co.uk/2013/09/03/my-footballing-cousin/