Home   Other   May and Bill’s Golden Wedding: ‘Half Ton of Best Coal’

In 1920, it was just May and Bill. Fifty years later, they sit surrounded by 25 relatives – 17 of them direct descendents. If every picture tells a story, then this one depicts a family saga.

It is their Golden Wedding: 7 o’clock in the evening of Friday 6 November 1970, in The Warren Tea Rooms, Bourton-on-the-Water. May has received a bouquet presented by her first great-grandchild Sally Waite, aged two. On her lap she holds 50 roses which have come from Covent Garden, London. She is wearing a new dress (£8.11/6d with alterations) and Bill has a new woollen waistcoat (£3.15s). These are some of the presents for their 50th wedding anniversary, along with £5 cash per family (total £20.00).

But as May wrote afterwards: ‘What touched us most was half Ton of best coal from our neighbours who have been our neighbours for thirty three years.’ 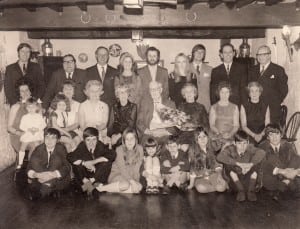 Everyone has shuffled into rows for a photo which tells the history of four generations in a single snapshot.

At the hub sit May and Bill, the first generation. Sharing the middle row is the second generation, their daughters Eileen, Peggy, Nancy and Thelma and, behind them, their four husbands Ken, Vic, John and Reg. And then, at the front and scattered elsewhere, there is the third generation outnumbering the other two combined – cousins Susan, John, Julie, Sally, Simon, Andrew, Paul, Jayne, Nicky, Chris, Judith and Sarah.

Oh, and there is one representative of the fourth generation – Sally Waite, perched on the knee of her mother. Susan is eight months pregnant with a second great-grandchild, who will be born five weeks later. She will name him Mark.

Trying to depict these various bloodlines, people have arranged themselves in family trees.

On the left John Waite, looking fit from his footballing, stands behind Susan, who is in a red velvet dress she made herself during her first pregnancy. She is nursing Sally, in pale pink with two white bows holding her hair in bunches.

Next there Is Reg Clarke, leaning forward over Thelma, Sarah and Christopher, with Judith in the middle of the front row.

To the right, Ken Dale stands behind Eileen. Their offspring, Susan and John, are too big to sit on anyone’s knee.

Towards the end of the line John Moy gives a big smile behind Nancy, who herself sits directly behind Jayne, Paul, Nicky and Andrew.

Finally there is Vic Riding, looking pleased at having organised the party with the military precision he learned in the RAF. He is behind Peggy. Julie is four places to his right, and Simon and Sally are at the front.

A second photo was taken, this time showing the four sisters with their parents. 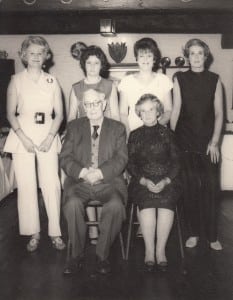 Bill’s Angels. Apparently modelling herself on Farah Fawcett Major – star of the 1970 TV hit Charlie’s Angels – Eileen is wearing a trouser suit in glossy gold as she poses with her sisters Nancy, Thelma and Peggy behind Bill and May. She bought it from Mary Coo’s, Grimsby

After that, everyone got down to the serious business of celebration. At 8 o’clock the family members were joined by a further 18 guests and the main dish was served: chicken in the basket – then the peak of culinary sophistication – at £1 a head. 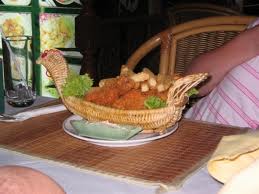 Sally felt very sophisticated as she tucked in. It was her first experience of chicken in the basket and the high life it promised

The new guests included Rissington Road neighbours – the Webbs, Mr and Mrs Martin, Mrs Collett (who helped Eileen give birth to Susan in the back of a taxi) and Mr and Mrs Bowles – as well as friends Beryl and Walter Martin.

For the toast, there was champagne costing £6 in total followed by slices of the cake which Nancy had organised.

For refreshment, there were soft drinks for the children and a punch bowl for the adults. The men may have ordered beer as well, usually keg such as Double Diamond or Red Barrel which had pushed real ale out of favour. The women might have had Babycham or port-and-lemon except for May, who preferred eggnog.

The music was provided by guests bringing along their favourite records and putting them on the restaurant’s stereo player. People got on their feet and performed dances such as the twist, the shuffle and the locomotion.

Sally Northfield nee Riding, who had missed a call-up to her school’s 1st year netball team that day, says: ‘I can remember dancing to The Witch Queen by Redbone, probably with Judith, and feeling very sophisticated eating chicken in the basket – but the less said about my outfit the better!’ 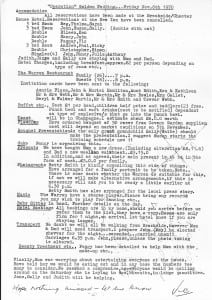 ‘Operation’ Golden Wedding – as an ex-RAF officer, Vic Riding planned it like a military exercise. A priceless document.

Vic’s excellent memorandum – he headed it ‘Operation’ Golden Wedding – was discovered after Peggy’s death. Sally was to use it 40 years after it was written when it was her turn to address the annual Minchin reunion.

In it, he types: ‘Mum (May) was worrying about entertaining everyone at the house (12 Rissington Road). Have told her we would be eating out and in any case the numbers too many to consider. We reached a compromise, as everyone would be calling around on the Saturday she is laying in tea, biscuits in large quantities. Jane, Sally and Judith will be helping.’

While the party was held at The Warren, people were staying at Chester House at £2 per per head including breakfast. John Moy was delegated to drive May and Bill between the various locations.

The picture freezes one moment. It shows the post-War prosperity spreading across the Minchins as they demonstrate family unity. There is a full turnout. It is a model for the annual Bourton reunions which were to start 27 years later. 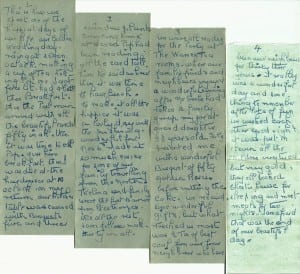 ‘Half Ton of best coal’. This note written by May Minchin was found by Simon Riding in his attic. It reads” ‘This is how we spent one of the happiest days of our life our Golden Wedding day. Rising at seven o’clock, making a cup of tea, taking Pop one, I got fire lit, had a bath, then Breakfast. Then the Postman arrived with all the beautiful cards, fifty in all. Then it was time to help Pop, give him breakfast. Then I was due at the hairdresser at 10 o’clock. On my return our kitchen table was covered with bouquets, five and three window plants arriving home at eleven. Pop had been reading all the cards. Took him he said an hour. Then it was time to have lunch. To make it all the happier it was a lovely day with the sun shining, wonderful for Nov 6th. Made it so much easier for some of our family travelling from the north. Thelma and family were the first to arrive from Cleethorpes. Then all the rest soon followed making thirty in all. We were all ready for the Party at The Warren Tea rooms, where our family, friends and neighbours enjoyed a wonderful evening. After Mr Sambo had taken a family group, my great granddaughter, three and a half years old Sally, presented me with a wonderful Bouquest of fifty Golden Roses before cutting the cake. We received some wonderful gifts but what touched us most was half Ton of best coal from our neighbours who have been our neighbours for thirty three years. It really was a wonderful day and something to remember. After lots of fun we wished each other goodnight. It was just on eleven. All the children were very tires but very good. They all booked Chester House for sleeping and most for two nights. I am afraid that was the end of our beautiful day.’

‘Bourton couple wed 50 years. Mr and Mrs William Victor Minchin, of 12 Rissington Road, Bourton on the Water, celebrate their golden wedding anniversary tomorrow. Mr Minchin, who is now aged 85, married his wife May, 78, in Cheltenham on November 6, 1920. Mr Minchin, who is a native of Bourton on the Water, left school in 1900 and started work as an errand boy for T and H Wilkins, bakers, of /Bourton, where he earned 3s. (15p) a week. Eventually he moved into the bakery, where he stayed with the firm for 36 years. He did not serve in the Forces during the First World War as he was exempt on account of his work. For the last 20 years of his working life Mr Minchin was employed as a maintenance worker at RAF Little Rissington. Mr Minchin has always been a keen sportsman, and during his earlier life he played football for Bourton Rovers and cricket for the old Bourton Vale Wednesday Club. He was also a member of the Victoria Hall billiards and snooker teams and a keen gardener. Mrs Minchin is a member of the Bourton branch of the Mothers’ Union and the Cheery Club. When she first moved to Bourton as a young bride she was employed as a chidren’s nurse by the late Dr Walter Moore, of The Cottage, Bourton. The couple have four daughters, 12 grandchildren and one great grandchild. 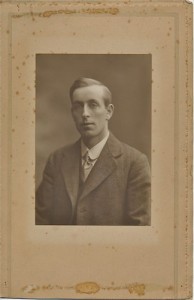 This is an uncropped version of the photograph of Bill Minchin in his younger days. It comes courtesy of Simon Bartrum, whose grandmother Florence (1894-1987) was Bill’s youngest sister